You’d think I was a sports reporter. It was the onset of a time before time, when bike racers were only starting out as heroes and US Postal was unborn and therefore uncorrupted and one Lance Armstrong was nowhere to be seen. In 1985, for a second year running, Jeff Pierce swept all before him, in 100 degrees of heat and nearly as much of an incline. Sweating from the sidelines under big cowboy straw hats, we drank everything we could find and had a ball. 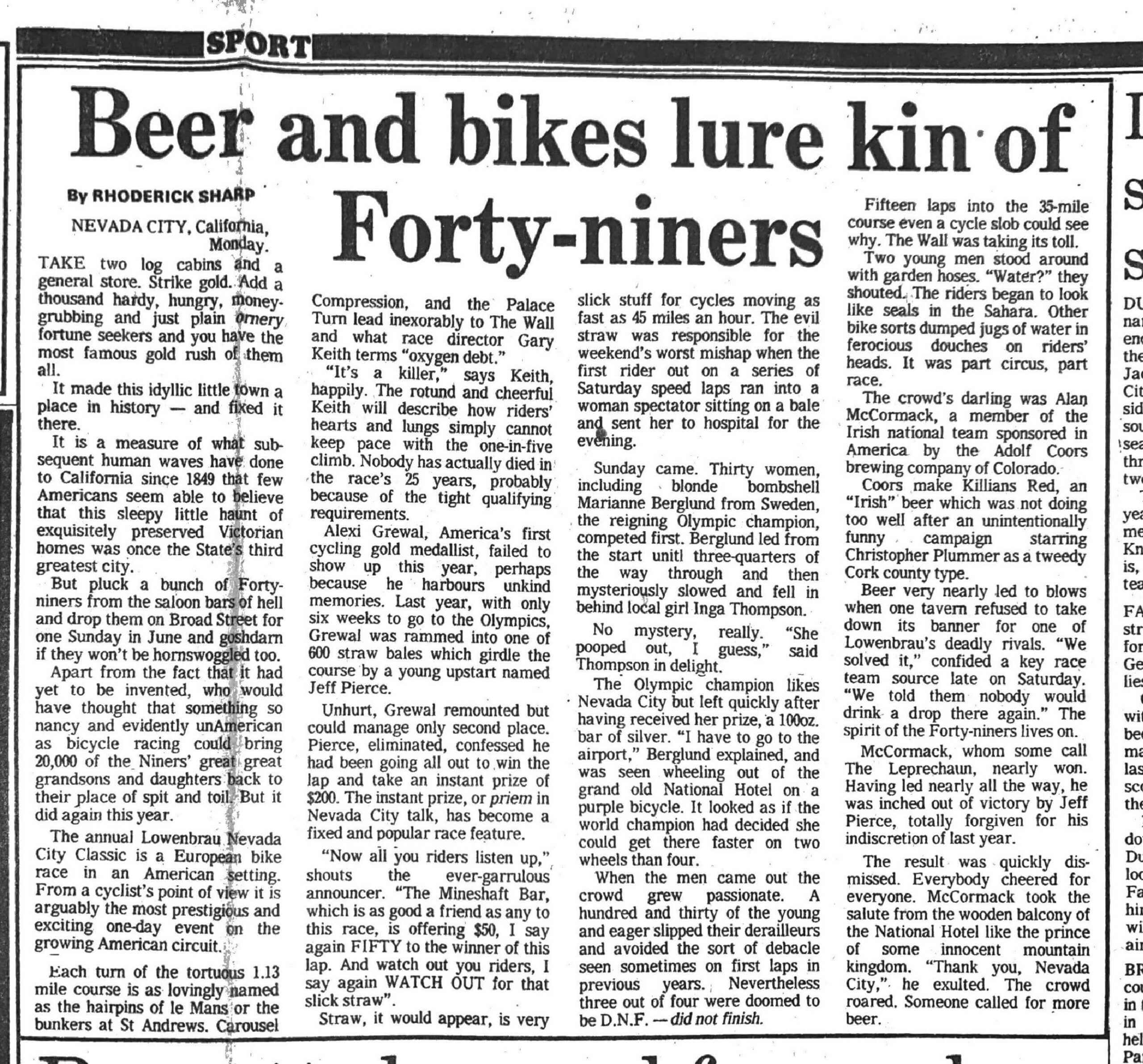 Take two log cabins and a general store. Strike gold. Add a thousand hardy, hungry, money grubbing and just plain ornery fortune seekers and you have the most famous gold rush of them all.

It made this idyllic little town a place in history – and fixed it there. It is a measure of what subsequent human waves have done to California since 1849 that few Americans seem able to believe that this sleepy little haunt of exquisitely preserved Victorian homes was once the State’s third greatest city.

But pluck a bunch of Forty-niners from the saloon bars of hell and drop them on Broad Street for one Sunday in June and goshdarn if they won’t be hornswoggled too. Apart from the fact that it had yet to be invented, who would have thought that something so nancy and evidently unAmerican as bicycle renting could bring 20,000 of the Niners’ great great grandsons and daughters back to their place of spit and toil. But it did again this year.

The annual Lowenbrau Nevada City Classic is a European Bike race in an American setting. From a cyclists’ point of view it is arguably the most prestigious and exciting one-day event on the growing American circuit.

Each turn of the tortuous 1.13 mile course is as lovingly named as the hairpins of le Mans or the bunkers at St Andrews. Carousel Compression, and the Palace Turn lead inexorably to The Wall and what race director Gary Keith terms “oxygen debt”.

Compression, and the Palace Turn lead inexorably to The Wall and what race director Gary Keith terms “oxygen debt.”

“It’s a killer,” says Keith, happily. The rotund and cheerful Keith will describe how riders’ hearts and lungs simply cannot keep pace with the one-in-five climb. Nobody has actually died in the race’s 25 years, probably because of the tight qualifying requirements.

Alexi Grewal, America’s first cycling gold medallist, failed to show up this year, perhaps because he harbours unkind memories. Last year, with only six weeks to go to the Olympics, Grewal was rammed into one of 600 straw bales which girdle the course by a young upstart named Jeff Pierce.

Unhurt, Grewal remounted but could manage only second place. Pierce, eliminated, confessed he had been going all out to .win the lap and take an instant prize of $200. The instant prize, or priem in Nevada City talk, has become a fixed and popular race feature.

“Now all you riders listen up,”, shouts the ever-garrulous announcer. “The Mineshaft Bar, which is as good a friend as any to this race, is offering $50, I say again FIFTY to the winner of this lap. And watch out you riders, I say again WATCH OUT for that slick straw”.

Straw, it would appear, is very slick stuff for cycles moving as fast as 45 miles an hour. The evil straw was responsible for the weekend’s worst mishap when the first rider out on a series of Saturday speed laps ran into a woman spectator sitting on a bale an sent her to hospital for the evening.

Sunday came. Thirty women, including blonde bombshell Marianne Berglund from Sweden, the reigning Olympic champion, competed first. Berglund led from the start until three-quarters of the way through and then mysteriously slowed and fell in behind loO.al girl Inga Thompson.

No mystery, really. “She pooped out, I guess,” said Thompson in delight.

The Olympic champion Hies Nevada City but left quickly after having received her prize, a 100oz. bar of silver. “I have to go to the airport,” Berglund explained, and was seen wheeling out of the grand old National Hotel on a purple bicycle. It looked as if the world champion had decided she could get there faster on two wheels than four.

When the men came out the crowd grew passionate. A hundred and thirty of the young and eager slipped their derailleurs and avoided the sort of debacle seen sometimes on first laps in previous years. , Nevertheless three out of four were doomed to be D.N.F. —did not finish.

Fifteen laps into the 35-mile course even a cycle slob could see why. The Wall was taking its toll.

Two young men stood around with garden hoses. “Water?” they shouted; The riders began to look like seals in the Sahara. Other bike sorts dumped jugs of water in ferocious douches on riders’ heads. It was part circus, part race.

The crowd’s darling was Alan McCormack, a member of the Irish national team sponsored in America by the Adolf Coors brewing company of Colorado.

Coors make Killians Red, an “Irish”‘ beer which was not doing too well after an unintentionally funny campaign starring Christopher Plummer as a tweedy Cork county type.

Beer very nearly led to blows when one tavern refused to take down its banner for one of Lowenbrau’s deadly rivals. “We solved it,” confided a key race team source late on Saturday. “We told them nobody would drink a drop there again.” The spirit of the Forty-niners lives on.

McCormack, whom some call The Leprechaun, nearly won. Having led nearly all the way, he was inched out of victory by Jeff Pierce, totally forgiven for his indiscretion of last year.

The result was . quickly dis­missed. Everybody cheered for everyone. McCormack took the salute from the wooden balcony of the National Hotel like the prince of some innocent mountain kingdom. “Thank you, Nevada City,’ he exulted. The crowd roared. Someone called for more beer.