Hokum in the Highlands

I promise I’m not making it up when I say that for a few years my March 1986 review of the movie Highlander starring Christopher Lambert and Sean Connery would pop up near the top of any internet search. It doesn’t now, so don’t even try. Anyway the sight of Connery, looking splendid as usual as a Spanish grandee, will stay with me long after the flying heads and general time-traveling gory excitement. We watched it in near isolation one afternoon in the Vogue Theatre on Sacramento Street in San Francisco so I didn’t embarrass anyone with my hoot when oor Sean asks ‘what is haggis?” 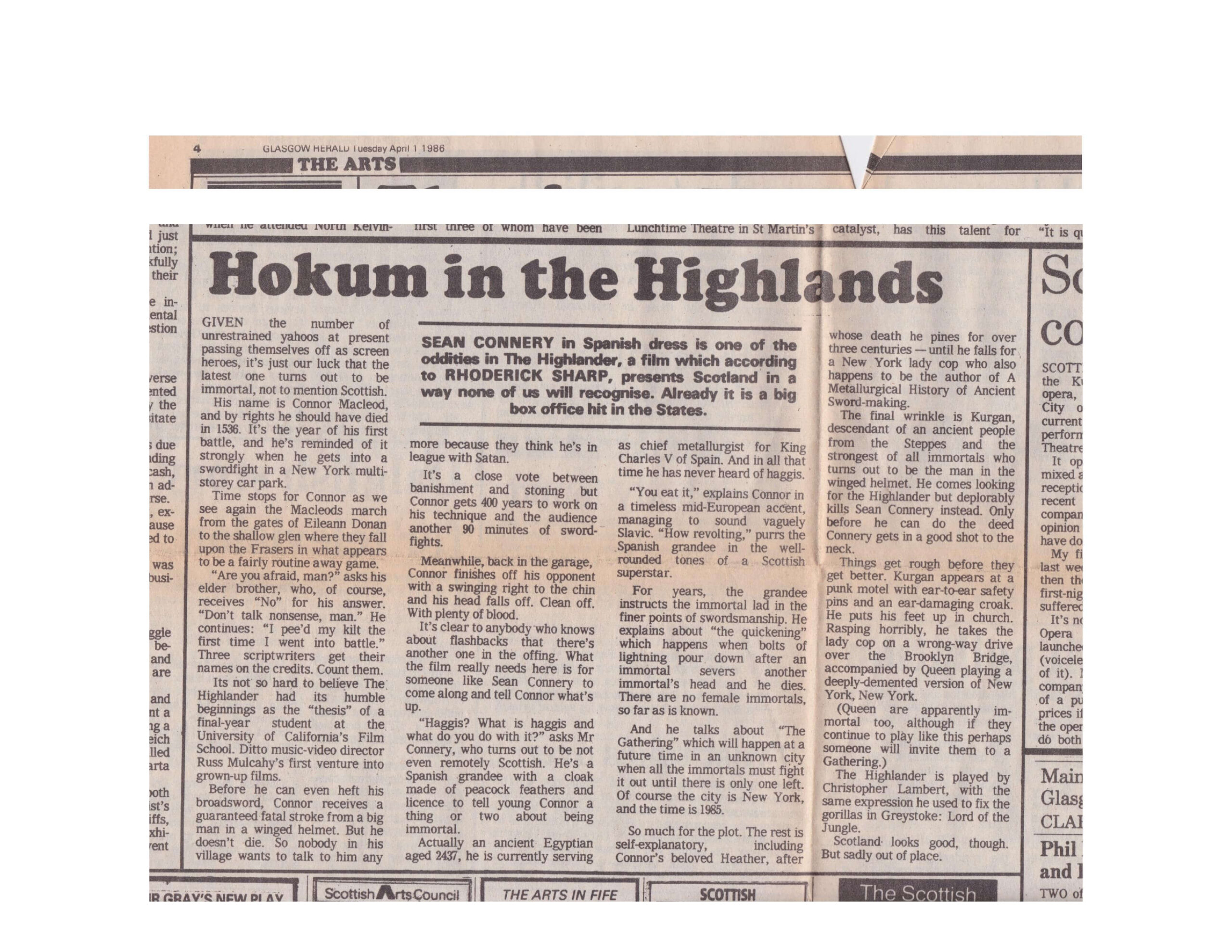 SEAN CONNERY in Spanish dress is one of the oddities in The Highlander, a film which according to RHODERICK SHARP, presents Scotland in a way none of us will recognise. Already it is a big box office hit in the States.

GIVEN the number of unrestrained yahoos at present passing themselves off as screen heroes, it’s just our luck that the latest one turns out to be immortal, not to mention Scottish.

His name is Connor Macleod, and by rights he should have died in 1536. It’s the year of his first battle, and he’s reminded of it strongly when he gets into a swordfight in a New York multi­storey car park.

Time stops for Connor as we see again the Macleads march from the gates of Eileann Ronan to the shallow glen where they fall upon the Frasers in what appears to be a fairly routine away game.

“Are you afraid, man?” asks his elder brother, who, of course, receives “No” for his answer. “Don’t talk nonsense, man.” He continues: “I pee’d my kilt the first time I went into battle.” Three scriptwriters get their names on the credits. Count them.

Its not so hard to believe The: Highlander had its humble beginnings as the “thesis” of a final-year student at the University of California’s Film School. Ditto music-video director Russ Mulcahy’s first venture into grown-up films.

Before he can even heft his broadsword, Connor receives a guaranteed fatal stroke from a big man in a winged helmet. But he doesn’t die. So nobody in his village wants to talk to him any more because they think he’s in league with Satan.

It’s a close vote between banishment and stoning but Connor gets 400 years to work on his technique and the audience another 90 minutes of sword-fights.

Meanwhile, back in the garage, Connor finiihes off his opponent with a swinging right to the chin and his head falls off. Clean off. With plenty of blood.

It’s clear to anybody who knows about flashbacks that there’s another one in the offing. What the film really needs here is for someone like Sean Connery to come along and tell Connor what’s up.

“Haggis? What is haggis and what do you do with it?” asks Mr Connery, who turns out to be not even remotely Scottish. He’s a Spanish grandee with a cloak made of peacock feathers and licence to tell young Connor a thing or two about being immortal.

Actually an ancient Egyptian aged 2437, he is currently serving as chief metallurgist for King Charles V of Spain. And in all that time he has never heard of haggis.

“You eat it,” explains Connor in a timeless mid-European accent, managing to sound vaguely Slavic. “How revolting,” purrs the Spanish grandee in the well-rounded tones of a Scottish superstar.

For years, the grandee instructs the immortal lad in the finer points of swordsmanship. He explains about “the quickening” which happens when bolts of lightning pour down after an immortal severs another immortal’s head and he dies. There are no female immortals, so far as is known.

And he talks about “The Gathering” which will happen at a future time in an unknown city when all the immortals must fight it out until there is only one left. Of course the city is New York, and the time is 1985.

So much for the plot. The rest is self-explanatory, including Connor’s beloved Heather, after whose death he pines for over three centuries — until he falls for a New York lady cop who also happens to be the author of A Metallurgical History of Ancient Sword-making.

The final wrinkle is Kurgan, descendant of an ancient people from the Steppes and the strongest of all immortals who turns out to be the man in the winged helmet. He comes looking for the Highlander but deplorably kills Sean Connery instead. Only before he can do the deed Connery gets in a good shot to the neck.

Things, get rough before they get better. Kurgan appears at a punk motel with ear-to-ear safety pins and an ear-damaging croak. He puts his feet up in church. Rasping horribly, he takes the lady cop on a wrong-way drive over the Brooklyn Bridge, accompanied by Queen playing a deeply-demented version of New York, New York.

(Queen are apparently im­mortal too, although if they continue to play like this perhaps someone will invite them to a Gathering.)

The Highlander is played by Christopher Lambert, with the same expression he used to fix the gorillas in Greystoke: Lord of the Jungle.

Scotland, looks good, though. But sadly out of place.