Up All Night — a brief history

In the spring of 1994 Rhod Sharp and a deeply talented startup team led by editor Simon Waldman and assistant editor Ian Parkinson were hired to devise a night time show for the launch of Britain’s first 24 hour national news and sports station, BBC Radio 5 Live.  Rhod was working as assistant foreign editor at the time and recognized that a good way to fill the “graveyard” shift, initially from 2-5AM, would be to engage with the BBC’s talented pool of foreign correspondents, some of whom would be on the far side of the world and therefore in just the right time zones to be “up all night”. 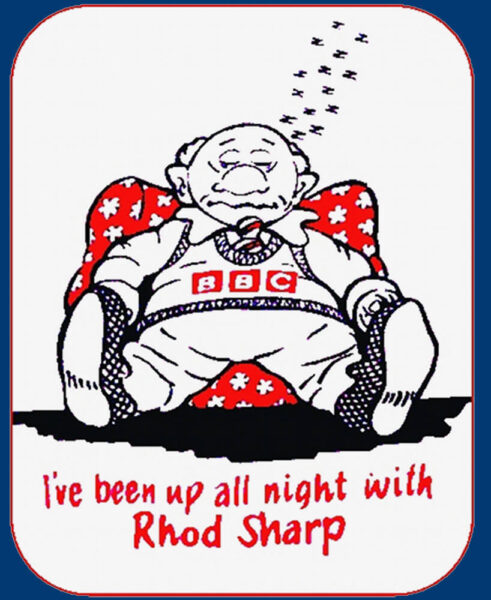 Rhod proposed the show to the network’s debut Controller Jenny Abramsky, who liked the idea on the spot and suggested that Sharp, given his extensive knowledge of foreign affairs, should present it.  The cheeky title was definitely his. Well known graduates of its collegial production process include Broadcasting House and PM’s Paddy O’Connell, BBC reporters Lesley Ashmall, Stephen Chittenden and Linda Pressly,  Sky’s Robert Nisbet, the BBC News Channel’s Ros Atkins and most lately Calum Macdonald, making his summer 2020 presenting debut on Times Radio.

A four hour mix of world news and magazine style current affairs, Up All Night received four Sony awards, including Silver in the 1996 contest for best news and current affairs radio programme, the one Sharp is most proud of. It also took Gold in 1998 and 1999 for best late night talk/news radio.  In 1998 the Washington Post’s Fred Barbash wrote a column advocating for the show to be more readily available  as a download in the new MP3 format, describing it as “probably the best English language night-time radio show in the world.”

The show was less than a year old when the 50th anniversary of the Hiroshima bombing in 1995 took the show and Rhod to Japan and in 1996 he wrote and presented a pioneering documentary series on the irresistible rise of the internet. Caught in the Web missed being the first internet-obsessed radio series to air anywhere in the world by one week. This was followed the next year by I’ll Be Watching You, which revealed the extent of workplace surveillance in Britain.

Also in 1996 producers Nick Miles, Matt McGarth and Rhod took a 66lb satellite phone for a 3000 mile trip across Canada, starting in Quebec City and ending in Vancouver for a radio first – 5 live shows from 5 cities in 5 successive nights.

Having given plenty of scope on air for anxious voices in the territory like Martin Lee, it was entirely fitting that Rhod’s talented weekend co-presenter for the first six years, Richard Dallyn, be present to cover the lowering of the Union Jack over Hong Kong’s HMS Tamar naval based for the last time in July 1997.

In April 2001, after extensive negotiations, the Up All Night production team of editor Howard Benson, Paul Waters, Beth Tapp and Rhod were permitted to visit Cuba for a radio first – a week of live BBC broadcasts with help from local fixer Ernesto Castellanos  that took listeners from the Buena Vista social club to the original Old Man in Ernest Hemingway’s story The Old Man and the Sea.

Later that year, Rhod and Howard were on the second UK-originating flight allowed into New York City on September 15 2001, and they returned on a regular basis to hear the views of people all over the United States, especially during election season.

In 2003 sports producer Jim Hollis and Rhod were tasked by then Controller Bob Shennan to make a series of short 5 minute features introducing baseball to British listeners. When their colleague Simon Brotherton visited Scotland’s one true baseball hero Bobby Thompson in the runup to the 2003 World Series, Bobby dedicated a ball to Rhod on the 52nd anniversary of his Series-winning Shot Heard Round the World.

A regular commentator on US primaries and conventions, Rhod was at the Democratic Convention in 2008 when a guest wearing jeans and a check shirt was brought unannounced into the live studio by producer Loretta Hogan and started talking. Warming up to ask this cowboy who he was and what he did, Rhod realized volubly on-air that it was the Jaws and Close Encounters star Richard Dreyfuss.

He talked to emotional African-Americans in the Mall at the Washington DC inauguration of President Barack Obama in 2009 and shellshocked runners and spectators in Boston in the immediate aftermath of the 2013 Boston Marathon bombing. Up All Night’s producers did their utmost to put breaking news on the air and Rhod and his listeners were at the aftermath of calamities from the Oklahoma City bombing of April 1995 to the Grenfell Tower fire, from the Columbine school shootings to 2012’s massive avalanche on Mount Everest.

On a sabbatical shortened by the events of 9/11, Rhod was persuaded to visit the historic New England coastal town of Marblehead Massachusetts and six years later he and his wife Vicki Staveacre sold their home of twenty years in south London and settled there. Owing to the rapid evolution of the internet and broadcasting technology he was able to take advantage of the 5 hour time difference and expand on techniques the team successfully employed on the road to script and present the whole show remotely.

From early 2008 to March 2020, Rhod broadcast live four hours a night, three nights a week, from an attic studio in the roomy colonial home built for “longshoreman” Joshua Orne in 1750.

With the words “nothing last forever” Rhod announced his intention on Twitter in December 2019 to vacate the Up All Night chair at the end of March 2020, 26 years after he began. In reaction to Covid 19, the show was taken off the air and Rhod was benched. Although he did not realize it at the time, his final Up All Night was broadcast on Thursday, March 19 2020.