Martin Scorsese believes the great British film making partnership of Michael Powell and Emeric Pressburger was responsible for “the longest period of subversive film-making in a major studio, ever”. Scorsese was a Powell fanboy long before he met him, as he explains in this Guardian interview in 2009. He also introduced him to his wife, the doyenne of Hollywood film editors, Thelma Schoonmaker. She it was who made a huge pot of tea for us at their home in San Quentin, California one sharp April day in 1985. My interview with Powell, whose Russian Mosfilm co-production of Anna Pavlova had just opened in a cutdown version in London, makes its reappearance here in the Library. 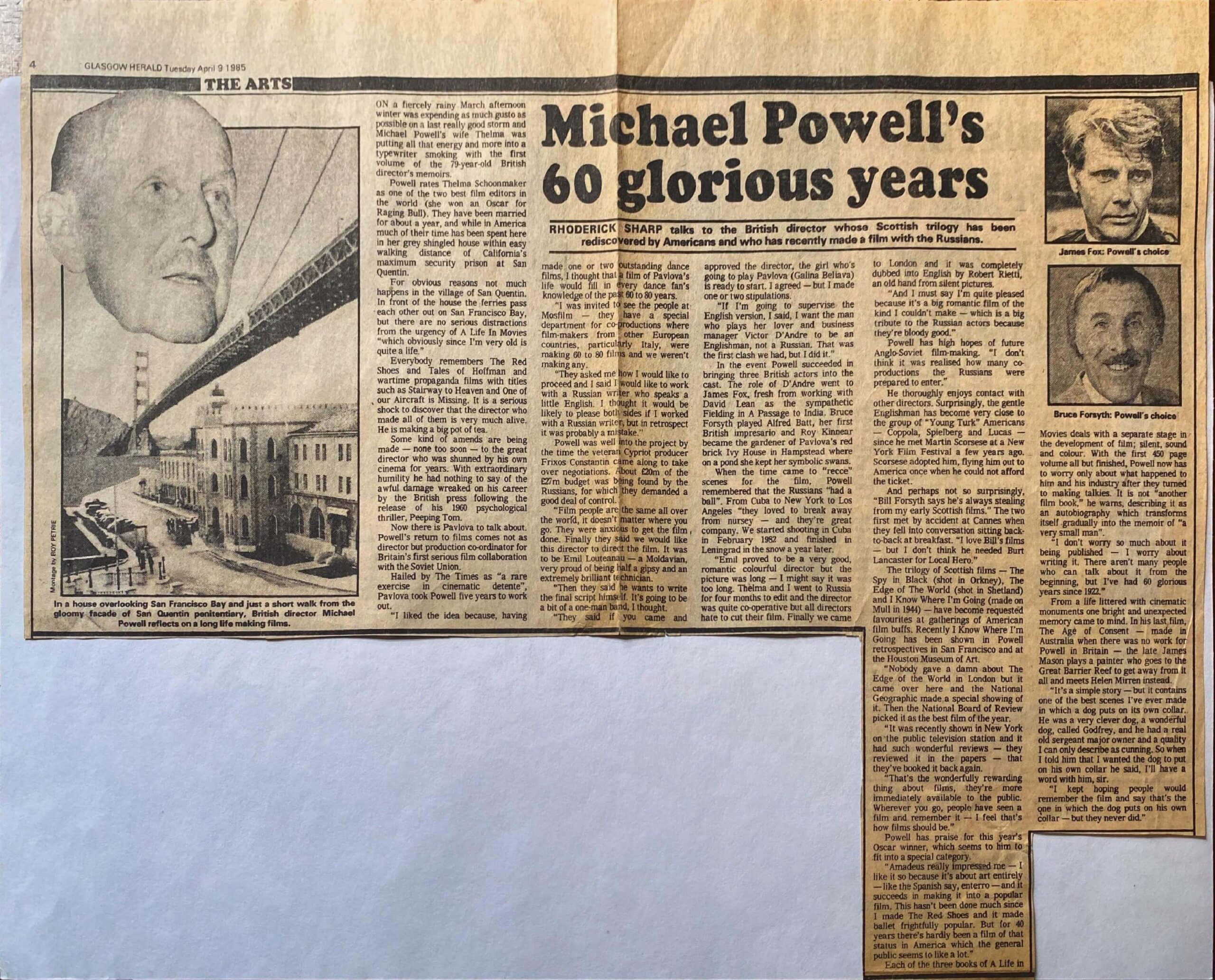 Rhoderick Sharp talks to the British director whose Scottish trilogy has been rediscovered by Americans and who has recently made a film with the Russians.

On a fiercely rainy March afternoon winter was expending as much gusto as possible on a last really good storm and Michael Powell’s wife Thelma was putting all that energy and more into a typewriter smoking with the first volume of the 79-year-old British director’s memoirs.

Powell rates Thelma Schoonmaker as one of the two best film editors in the world (she won an Oscar for Raging Bull). They have been married for about a year, and while in America much of their time has been spent here in her grey shingled house within easy walking distance of California’s maximum security prison at San Quentin.

For obvious reasons not much happens in the village of San Quentin. In front of the house the ferries pass each other out on San Francisco Bay, but there are no serious distractions from the urgency of A Life In Movies “which obviously since I’m very old is quite a life.”

Everybody remembers The Red Shoes and Tales of Hoffman and wartime propaganda films with titles such as Stairways to Heaven and One of our Aircraft is Missing. It is a serious shock to discover that the director who made all of them is very much alive. He is making a big pot of tea.

Some kind of amends are being made – none too soon –  to the great director who was shunned by his own cinema for years. With extraordinary humility had nothing to say of the awful damage wreaked on his career by the British press following the release of his 1960 psychological thriller, Peeping Tom.

Now there is Pavlova to talk about. Powell’s return to films comes not as director but production co-ordinator for Britain’s first serious film collaboration with the Soviet Union. Hailed by The Times as “a rare exercise in cinematic detente”, Pavlova took Powell five years to work out.

“I liked the idea because, having made one or two outstanding dance films, I thought that a film of Pavlova’s life would fill in every dance fan’s knowledge of the past 60 to 80 years.

“I was invited to see the people at Mosfilm – they have a special department for co-productions where film-makers from other European countries, particularly Italy, were making 60 to 80 films and we weren’t making any.

Powell was well into the project by the time the veteran Cyrptiot producer Frixos Constantin came along to take over negotiations. About £20m of the £27m budget was being found by the Russians, for which they demanded a good deal of control.

“Film people are all the same all over the world, it doesn’t matter where you go. They were anxious to get the film done. Finally they said we would like this director to direct the film. It was to be Emil Louteanau – a Moldavian, very proud of being half a gipsy and an extremely brilliant technician.

“Then they said he wants to write the final script himself. It’s going to be a bit of a one-man band I thought. They said if you came and approved the director, the girl who’s going to play Pavlova (Galiana Beliava) is ready to start. I agreed – but I made one or two stipulations.

“If I’m going to supervise the English version, I said, I want the man who plays her lover and business manager Victor D’Andre to be an Englishman, not a Russian. That was the first clash we had, but I did it”

In the event Powell succeeded in bringing three British actors into the cast. The role of D’Andre went to James Fox, fresh from working with David Lean as the sympathetic Fielding in A Passage to India. Bruce Forsyth played Alfred Batt, her first British impresario and Roy Kinnear became the gardener of Pavlova’s red brick Ivy House and Hampstead where on a pond she kept her symbolic swans. When the time came to “reece” scenes for the film, Powell remembered that the Russians “had a ball”. From Cuba to New York to Los Angeles “they loved to break away from nursey – and they’re great company. We started shooting in Cuba in February 1982 and finished in Leningrad in the snow a year later.

“Emil proved to be a very good, romantic, colourful director but the picture was long – I might say it was too long. Thelma and I went to Russia for four months to edit and the director was quite cooperative but all directors hate to cut their film. Finally we came to London and it was completely dubbed into English by Robert Rietti, an old hand from silent pictures.

Powell has high hopes of future Anglo-Soviet film-making. “I don’t think it was realised how many co-productions the Russians were prepared to enter”

He thoroughly enjoys contact with other directors. Surprisingly, the gentle Englishman has become very close to the group of “Young Turk” Americans – Coppola, Spielberg and Lucas – since he met Martin Scorsese at a New York Film Festival a few years ago. Scorsese adopted him, flying him out to America once when he could not afford the ticket.

And perhaps not so surprisingly, “Bill Forsyth says he’s always stealing from my early Scottish films.” The two first met by accident at Cannes when they fell into conversation sitting back-to-back at breakfast. “I love Bill’s films – but I don’t think he needed Burt Lancaster for Local Hero.”

The trilogy of Scottish films – The Spy in Black (shot in Orkney), The Edge of The World (shot in Shetland) and I Know Where I’m Going (made on Mull in 1944) – have become requested favourites at gatherings of American film buffs. Recently I Know Where I’m Going has been shown in Powell retrospectives in San Francisco and at the Houston Museum of Art.

“Nobody gave a damn about The Edge of The World in London but it came over here and the National Geographic made a special showing of it. Then the National Board of Review picked it as the best film of the year. “It was recently shown in New York on the public television station and it had such wonderful reviews – they reviewed it in the papers – that they’ve booked it back again.

“That’s the wonderfully rewarding thing about films, they’re more immediately available to the public. Wherever you go, people have seen a film and remember it – I feel that’s how films should be.”

Powell has praise for this year’s Oscar winner, which seems to fit into a special category. “Amadeus really impressed me – I like it so because it’s about art entirely – like the Spanish say, enterro – and it succeeds in making it into a popular film. This hasn’t been done much since I made The Red Shoes and it made ballet frightfully popular. But for 40 years there’s hardly been a film of that status in America which the general public seem to like a lot.”

Each of the three books of A Life in Movies deals with a separate stage in the development of film; silent, sound and colour. With the first 450 page volume all finished, Powell now has to worry only about what happened to him and his industry after they turned to making talkies. It is not “another film book,” he warns, describing it as an autobiography which transforms itself into the memoir of “a very small man”.

“I don’t worry so much about it being published – I worry about writing it. There aren’t many people who can talk about it from the beginning, but I’ve had 60 glorious years since 1922.”

From a life littered with cinematic monuments one bright and unexpected memory came to mind. In his last film The Age of Consent – made in Australia when there was no work for Powell in Britain – the late James Mason plays a painter who goes to the Great Barrier Reef to get away from it all and meets Helen Mirren instead.

“It’s a simple story – but it contains one of the best scenes I’ve ever made in which a dog puts on its own collar. He was a very clever dog, a wonderful dog, called Godfrey, and he had a real old sergeant major owner and a quality I can only describe as cunning. So when I told him I wanted the dog to put on his own collar he said, “I’ll have a word with him, sir.”

“I kept hoping people would remember the film and say that’s the one in which the dog puts on his own collar – but they never did.”